In this article learn how ECCO are transforming footwear manufacturing by 3D printing their DIP molds, instead of machining them, so that a single pair of mold inserts can be printed overnight at a significant price saving over that of an in-house CNC machined pair.

ECCO was founded in 1963 by Birte and Karl Toosbuy in Bredebro, Denmark. The company is still family-owned and employs 21,400 people worldwide. ECCO’s products are sold in 89 countries from over 2,180 ECCO shops and more than 14,000 sales points. Part of ECCO’s success is its vertical integration.

Unlike any other major shoe brand, ECCO owns and manages practically every step of the shoemaking process, from last making, mold making, leather tanneries, shoe factories to retail stores. Shoemaking is an incredibly manual process, and Toosbuy always saw ECCO’s factories as key to the company’s success. This belief led to several automation innovations over the decades in manufacturing processes, including robotic technology, largescale assembly machines, and the adoption of direct injection technology or DIP.

ECCO adopted Direct Injection Process (DIP) in the pursuit of finding a more efficient and reliable method to securely attach the upper part of a shoe to the midsole. A significant benefit of DIP is its automatability. Today, the vast majority of ECCO shoes are produced using DIP technology. The traditional method of attaching a shoe’s upper to its midsole is typically a manual process known as “stock-fit” manufacturing. First, the sole is molded, and then later is assembled by hand and cemented to the upper.

In the Direct Injection Process, the lasted upper comprises the top portion of the mold. A two-component polyurethane is mixed and injected into the mold to form the midsole while simultaneously forming a strong bond to the upper. In addition to a possible reduction in labor during assembly compared with a cemented sole, bonding the midsole to the upper during the molding process can result in fewer pressure points and increased comfort.

Innovating on DIP with 3D printing

Typically, a footwear brand will create several different design variations in multiple sizes during a new shoe’s development, each requiring its own mold. With high tooling costs and long lead times, brands are limited to a few tooling iterations per development cycle.

The R&D team at ECCO looked at several 3D printing technologies to potentially improve and speed up current product development processes. A large opportunity was apparent in 3D printed mold and last tooling that allows for conceptual footwear samples to be reviewed early in the development cycle at a competitive price point. 3D printed molds need to meet tight tolerances and produce shoes at the same quality and performance as those made on CNC’d aluminum molds. The product should be indistinguishable from a midsole made on a machined aluminum mold. ECCO’s search for the 3D printed solution explored numerous additive solutions available, but only one option passed their initial tests: the Stratasys Origin One. 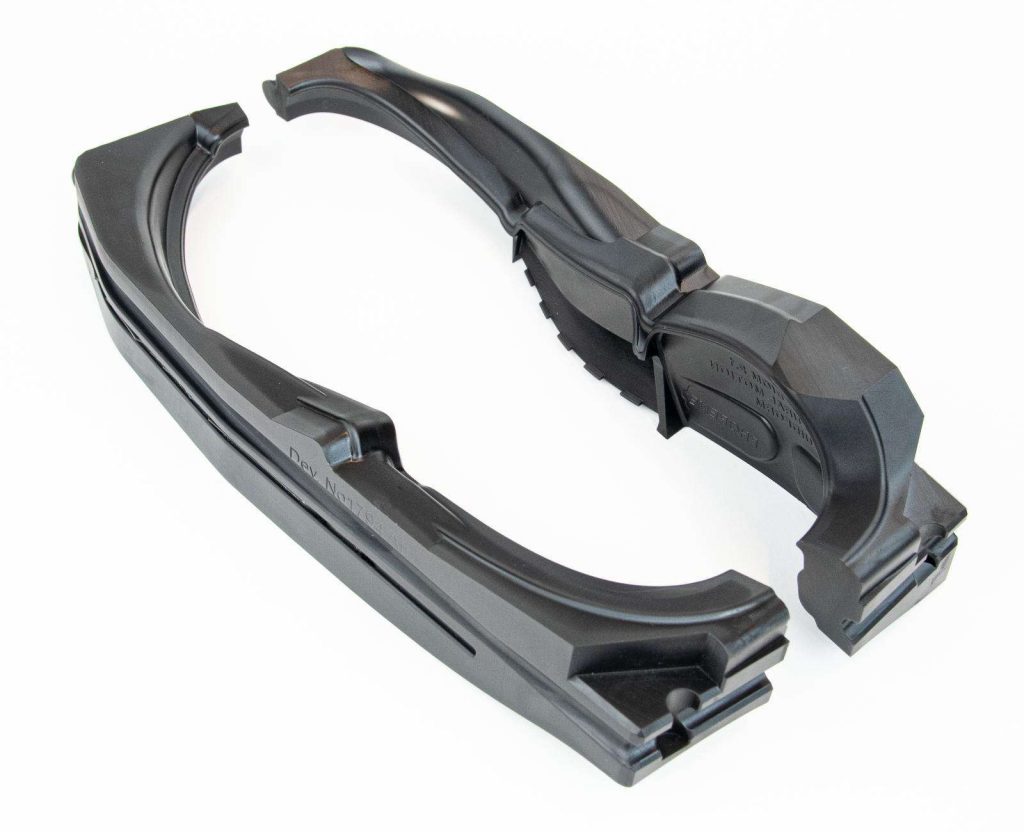 Early in the evaluation process, Origin One’s surface quality, print speed, accuracy, and ability to print large cross-sections stood out from the alternative solutions which ECCO tested. In addition, Origin works with leading resin partners to develop next-generation materials, which were also critical to ECCO’s needs. ECCO started working with the Origin team in late 2018, testing several materials printed on the Origin One. After narrowing the
material choice down to a material from Henkel Loctite, ECCO partnered with Henkel to further iterate and reformulate a material family to meet the specific requirements of the DIP process. 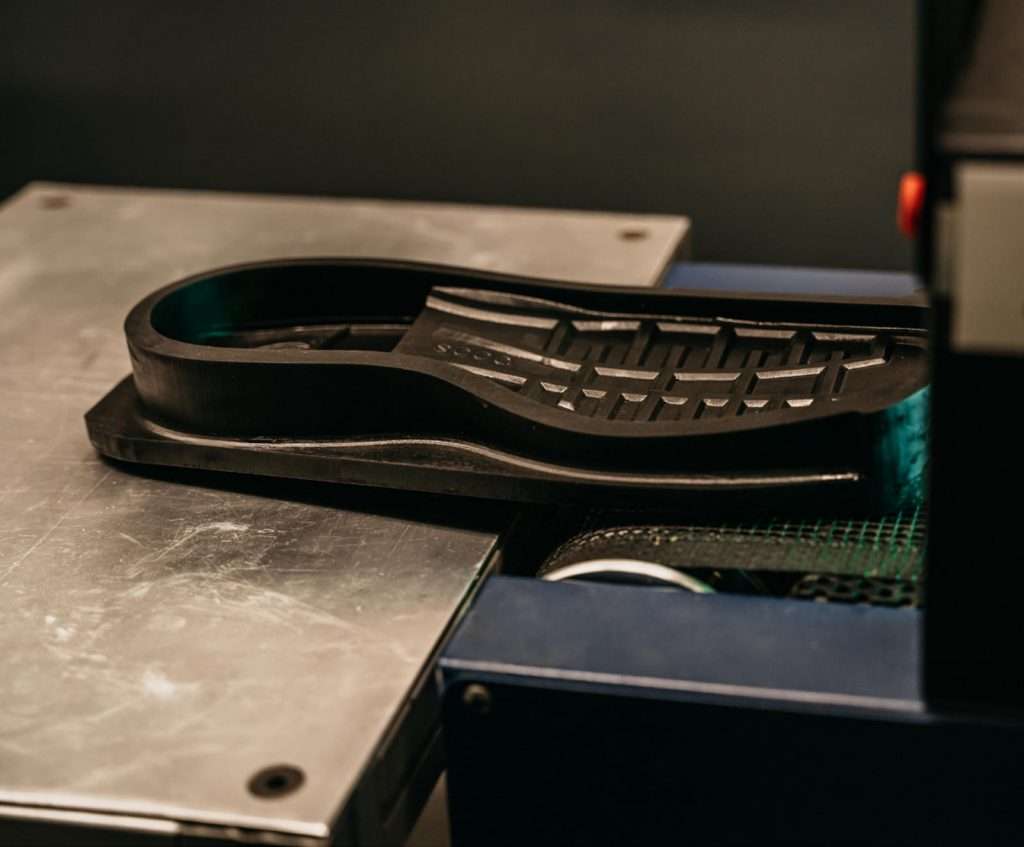 In addition to 3D printing molds with the Origin One, the ECCO team can also print shoe lasts using a different co-developed material from Henkel Loctite. By 3D printing lasts on-site, ECCO can achieve 24-hour turnaround of a complete set of DIP tooling.

During the next 12 months, ECCO acquired multiple Origin One 3D printers in Denmark and Portugal for further testing and validation. The 3D printed molds and lasts endured thousands of shots, with zero visible degradation, and the look of the shoe was on par with shoes produced on traditional CNC machined aluminum molds. ECCO designers could not tell the difference. 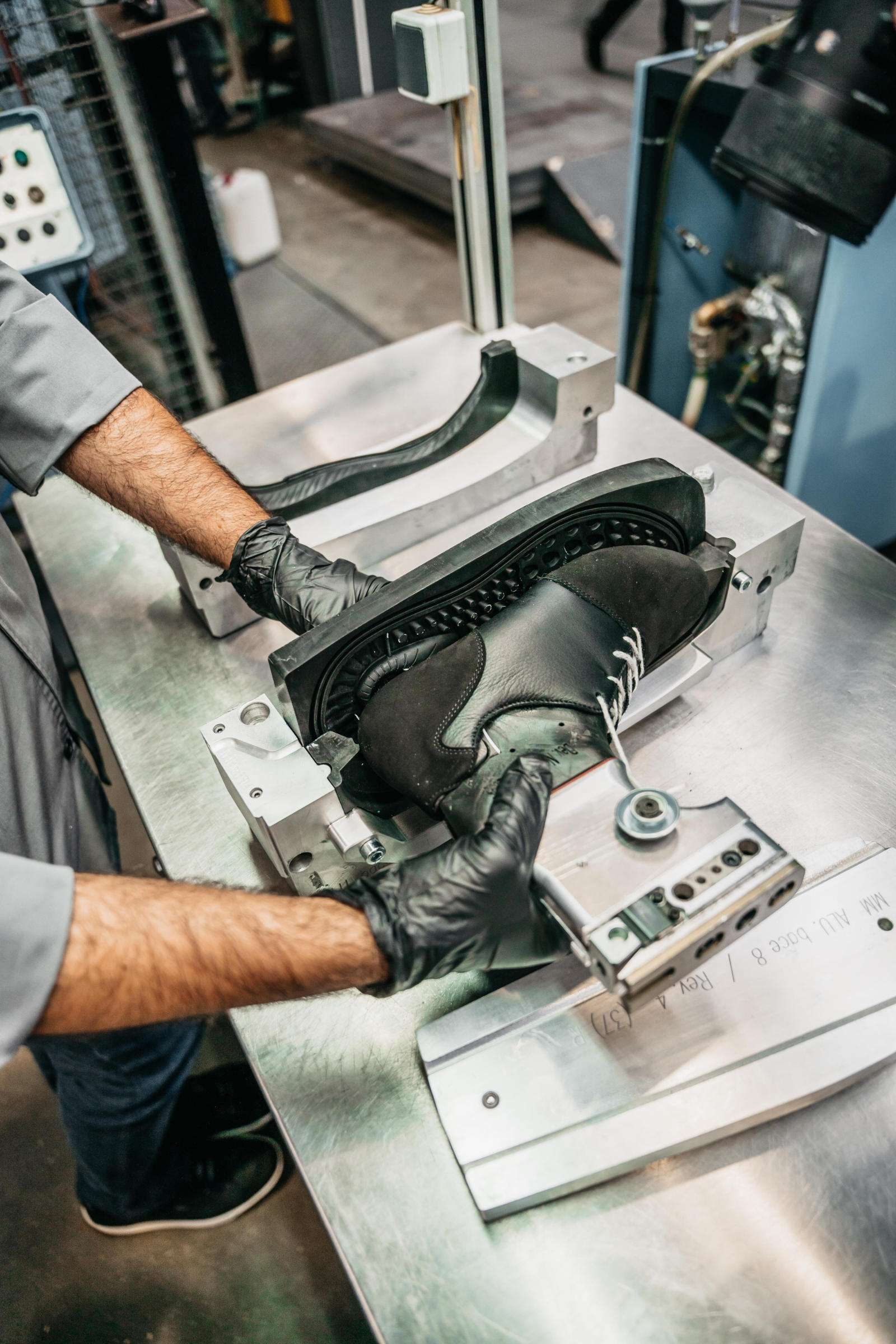 The future of Footwear Manufacturing and DIP Tooling

By 3D printing the DIP molds, instead of machining them, a single pair of mold inserts can be printed overnight at a significant price saving over that of an in-house CNC machined pair. This cost and time reduction gives shoe designers more freedom to have greater and faster iteration cycles. Designers and developers can wear test functional shoes earlier in the development cycle, allowing product groups to confirm fit and comfort for new styles. Brands can more easily get real production shoes in more varieties in front of their potential customers for feedback and pre-sale opportunities. By situating Stratasys Origin One printers in multiple locations, ECCO can quickly produce molds in the location that needs them, eliminating the need to ship heavy metal molds and eradicating the risk of shipping delays or tariffs.

For the wider footwear industry that want to take advantage of 3D printed DIP tooling, ECCO has a number of flexible routes to market with the ability to assist with every aspect of footwear manufacturing and mold making including engineering, part production or licensing of IP.

TriMech provides thousands of engineering teams with 3D design and rapid prototyping solutions that work hand-in-hand, from sketch to manufacturing. InterPro became a part of TriMech Solutions LLC in 2021.
Categorized As   3D Printing Consumer Products Molding P3
← Stratasys Origin One Accuracy, Repeatability and Isotropy Which 3D Printing Technology is Right For You? → 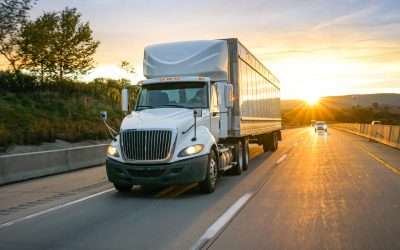 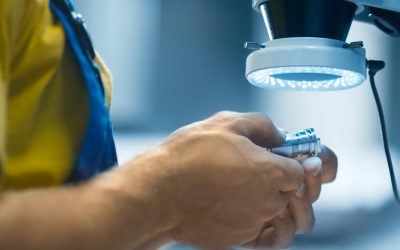 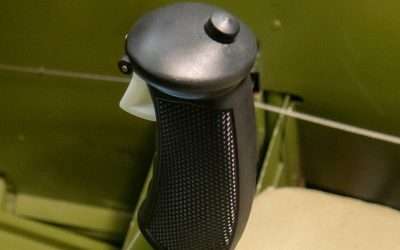